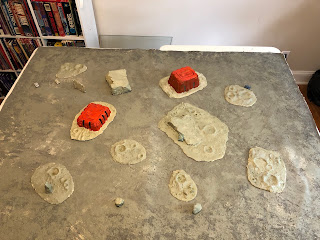 I finally got my moon table finished and ready for action.  Maybe later today or tomorrow I'll start playtesting my future tank game, Tracks, Turrets, and Tokamaks in earnest.

YouTube features quite a number of videos describing how to make  DIY battle mats out of acrylic latex caulk and canvas drop cloths, with little variation in the various techniques shown.

I followed the general instructions and created the moon themed mat shown here.  The mat turned out great: it's rugged, lies flat, rolls nicely, and doesn't seem to be shedding the texture bits at all.  I was a bit indulgent on my additives resulting in an aggressive surface texture.  Not enough to cause cocked dice or tumbling miniatures but almost.

The mat looks small to me but measures roughly 40 x 54 inches (102 x 137 cm); it took four tubes of caulk to cover that much area.  The caulk was relatively cheap at (US) $2.50 per tube, I've got tons of old house-paint in neutral colors, and I only used half of the (US) $13 drop cloth.  I should be able to crank out another mat for more terrestrial settings and this'll place my cost at less than $20 per mat plus time spent.

I fashioned six moon crater terrain features in addition to the sci-fi buildings I constructed previously.  Looking at the full table makes me realize I need a lot more scatter terrain to break line-of-sight; especially since in my game there are no weapon ranges.